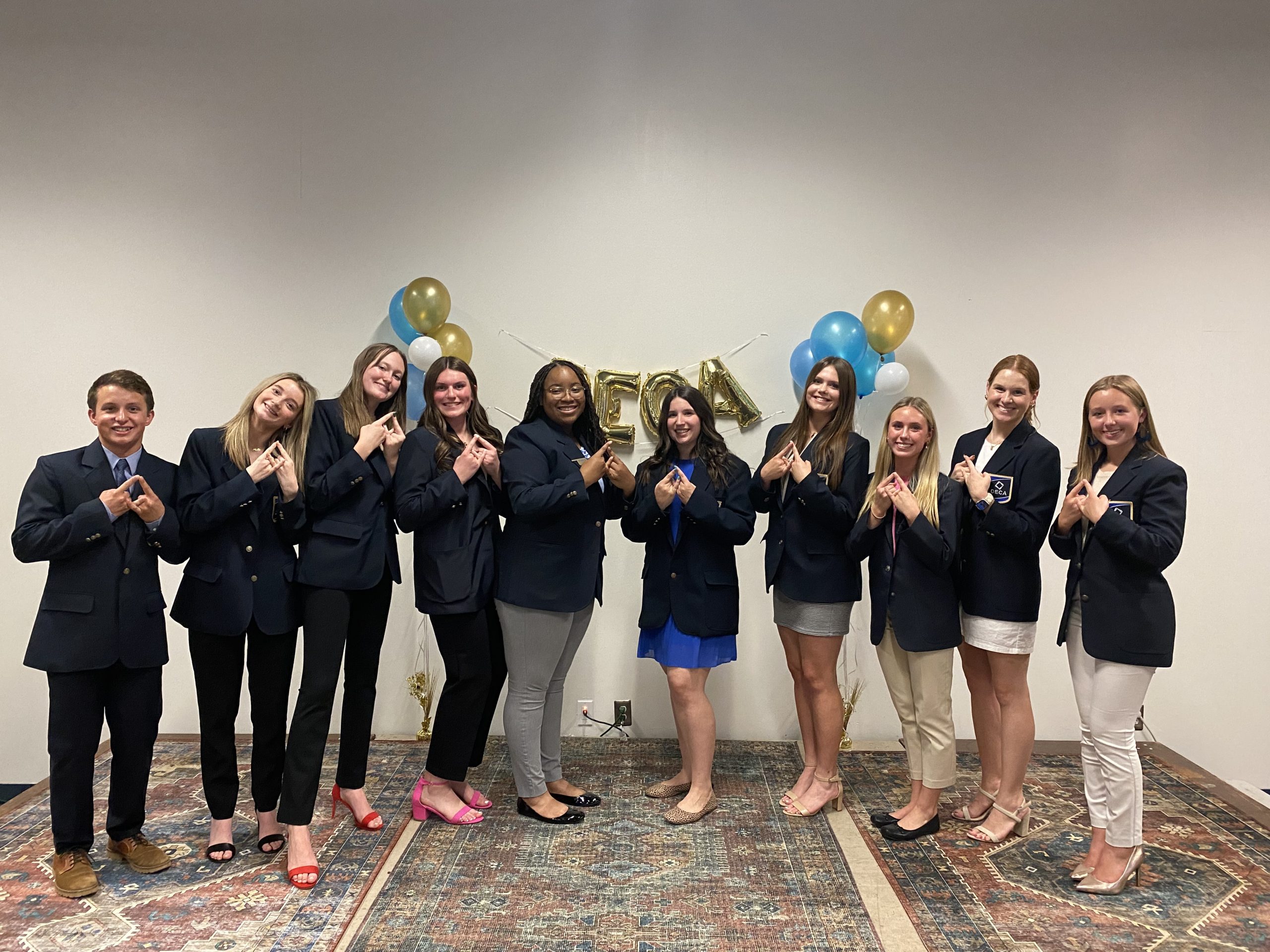 Putnam City North Initiation
Hi Oklahoma DECA! On Thursday, September 15, I had the privilege of attending the Putnam City North High
School DECA Initiation. And to let you in on a little secret, Putnam City North DECA has a very special place in
my heart. One of my best friends, Deyonee Sanders, has been a DECA officer there for the last two years, so I
actually got to meet many of the officers last year at the Fall Leadership Conference when Deyonne introduced me
to them. Safe to say, I was more than pleased when their advisor, Marie Page, extended the invitation to initiate their
new members into the 2022-23 school year.

As soon as I arrived at the school, I was greeted with big smiles and warm hugs from the entire team. Winnie Du,
PCN’s DECA president, actually screamed my name when she saw me which made my entire day. Winnie and I
have also become good friends ever since we met at last year’s FLC (so to everyone reading this, make sure you go
to FLC next year to meet a plethora of new people!) Jessica John, one of PCN’s vice presidents, handed me the
script and we all practiced it for a little while before we actually went to the auditorium. I was pleasantly surprised at
the number of students that were in attendance and I commended Ms. Page and her team on their successful
recruitment efforts. During the actual initiation, I had the DECA members recite the DECA pledge and the DECA
creed, then I lighted a candle for each one of DECA’s core pillars.
Afterward, we had refreshments in the cafeteria and I was able to meet some of their members. A lot of them were
interested in DECA state, so I discussed my experience at state and why they should attend. After we had cleaned
up, the officers took me on a tour of their school and their SBE. Putnam City North has a booming School-Based
Enterprise where they sell everything from coffee to cookies to chips. Overall, I had an amazing time at this chapter
visit and I am so glad I had the privilege to attend.
Edmond Memorial Initiation
Hi Oklahoma DECA! On Monday, September 26, I had the privilege of attending the Edmond Memorial High
School Initiation. Given that Edmond Santa Fe and Edmond Memorial are in the same school district, I was so
excited when I got invited. I had met Memorial’s advisor, Tammy Graves, multiple times before this so I knew
exactly what to expect from her and her chapter (all good things of course!)
Edmond Memorial is unique in that they do not have their initiation at their school. They actually had it in a large
gathering room at a nearby church. The venue was absolutely beautiful, so I definitely understood why they choose
to have it there. When I first arrived, I was greeted by a “hi!” from the team and then a quick rush back to work. All
of the officers were busy blowing up balloons, hanging up banners, setting out food, and placing programs on the
chairs. Safe to say, I also got to work once I got there. After we finished setting up, we got to run through the script a
couple of times. Edmond Memorial has a larger officer than most chapters, so the script was a lot longer in order to
include every officer.
Once students and parents started to arrive, I stood at the door greeting everyone and introducing myself. It was a
pleasant surprise to find that many of the students already knew who I was and were excited to see me there. Once
we got started, I’m not embarrassed to say that I actually messed up during my part. The podium where we spoke
had a binder with the script, and once it was my turn to speak, I accidentally knocked off the binder. Luckily, the
crowd was very kind. Similarly to my previous chapter visit, I had the members recite the DECA pledge and the
DECA creed.
Afterward, we took some group photos and a couple of 0.5 pictures. A lot of members were interested in DECA
state, so I discussed my experience at state and why they should attend. All in all, I had a great time at the Edmond
Memorial chapter visit!

Top 5 Things To Do at FLC

Does DECA Matter After High School?

DECA Through the Years